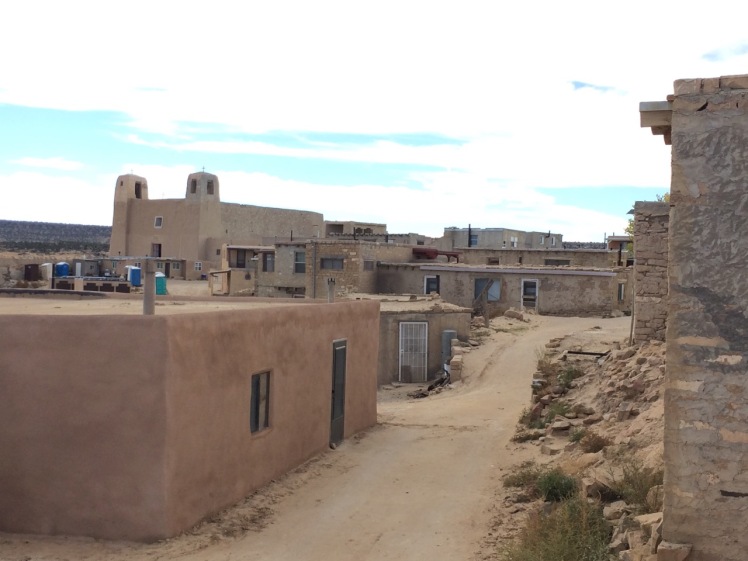 Acoma Pueblo was built atop White Rock Mesa, 367 feet above the desert floor, around 1150 A.D. It is said to be one of the oldest continuously inhabited communities in North America. Besides its history, the thought of a “Sky City” always intrigued me and was probably the main reason why I added this to my List of Destinations.

The 2-hour drive from Santa Fe to Sky City was beautiful and scenic. Admission to the Pueblo was $23 and included a guided tour to the top of the mesa (there were no self-guided options as far as I could tell). The tour guide, Audrey, was very friendly and informative. She and her family owned several properties on top of the mesa and it was interesting to hear her first-hand stories about the internal workings of this matriarchal society and how property was handed down solely to the women of the family. She also said many of the people who owned houses up there no longer lived in them in favor of more modern dwellings with running water and electricity – herself included!

Unfortunately, this Pueblo was not spared invasion by the Spanish conquistadors and the multitude of atrocities incurred on so many Native Americans during this time. One notable incident was an order from Juan de Onate to cut off the right feet of 24 Acoma Pueblo Indians after defeating the Pueblo in 1599. This violence and trauma must be very hard for the Acoma people to forget, especially since the Spanish mission still stands on top of one of their own ceremonial kivas.

There were actually a few artisans vending on top of the mesa, so come prepared if you’d like to buy some authentic Acoma pottery!